The Preservation Game: Preserve Arkansas Pushes to Protect the State’s Past

The Preservation Game: Preserve Arkansas Pushes to Protect the State’s Past

Categories: Print, Little Rock, Big Hero
To many, the crumbling buildings that dot the metro are white noise at best, a nuisance at worst. But to Mason Ellis and his team at Preserve Arkansas, they're a shining opportunity for rehabilitation. 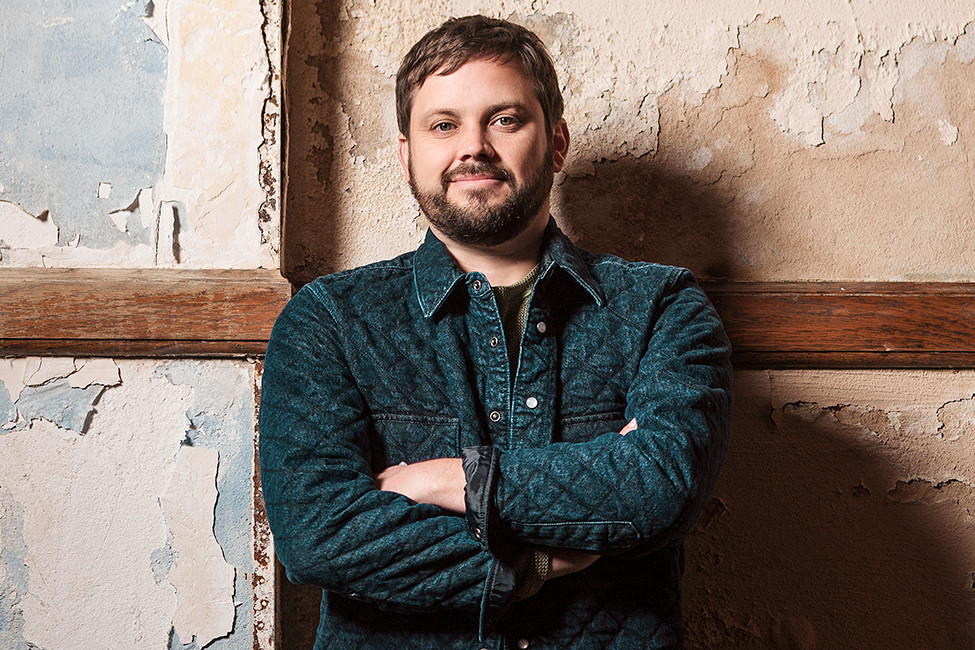 Surrounded by crumbling plaster caused by a leaky roof, architect and preservationist Mason Ellis takes stock of his next demanding project.

“I never knew how much pressure there was on an architect until I had to build a treehouse,” he says.

Ellis is anticipating completion of the lofty project he’s undertaken for his children, Avery, 5, and John Cooley, 2. But as he speaks, his words echo from the top of the twin staircase that anchors the interior of the St. Joseph Center of Arkansas, an imposing, four-story former orphanage frowning from a North Little Rock hilltop.

As an associate with WER Architects/Planners and as board president-elect for the nonprofit Preserve Arkansas, Ellis lends his expertise to the salvation and preservation of historic locations around the state. That includes St. Joseph’s, built in 1910 and on Arkansas’ Most Endangered Places list since 2013.

It may not be a treehouse, but with its fixtures, stained glass chapel windows, fireplaces, garden grounds, statuary and commanding brick facade, St. Joseph’s represents the work Ellis and Preserve Arkansas are doing for historic preservation.

“It helps us understand how we got to where we are and where we’re heading,” he says.

Preserve Arkansas was founded in 1981 and remains the state’s only nonprofit organization dedicated to preserving architectural and cultural history. The organization doesn’t handle the physical remodeling and renovation of structures, but it makes such things possible through education, advocacy and assistance.

“As long as it’s still standing and still has life in it,” Ellis adds.

Each year Preserve Arkansas releases its list of Arkansas’ Most Endangered Places with the hope the structures will attract the kind of attention needed to kick off a preservation effort.

The committee evaluates locations based on the significance of the property and the imminence of the threat. According to executive director Rachel Patton, some of those threats can even be a lack of funding.

Preserve Arkansas announces the list — usually no more than 10 locations — each May. The 2019 list was the nonprofit’s 20th and includes the Adler Building in Batesville, the Chu Building in Forrest City, the Emmet United Methodist Church, the Scipio A. Jones House in Little Rock, the Malvern Rosenwald School, the Mount Olive Missionary Baptist Church and Cemetery in Marvell and the Saenger Theater in Pine Bluff.

“We keep a running list of all the places that have ever been listed,” Patton says.

The list is not limited to buildings. Bridges, cemeteries, archaeological sites and historic landmarks are also fair game.

“And we welcome anybody to contact us,” Patton says. “You don’t have to be on the endangered list to ask for help.”

Once interest and funding are established, Preserve Arkansas makes requests to architecture firms and other entities for proposals to do evaluations, renovations and other necessary work.

St. Joseph’s first appeared on the 2013 list. In 2014 it underwent a condition assessment funded by a grant Preserve Arkansas helped obtain through the National Trust for Historic Preservation. Ellis’ firm, WER, conducted the assessment, a building study which helped prioritize the work needed and estimate costs.

“That’s when I got to walk around here,” Ellis says.

St. Joseph’s decrepit, wooden porches on either end of the building were too far gone to be saved and were removed as a safety hazard, while the leaky roof is another concern.

“Keeping a building in the dry is always a priority,” Patton says. 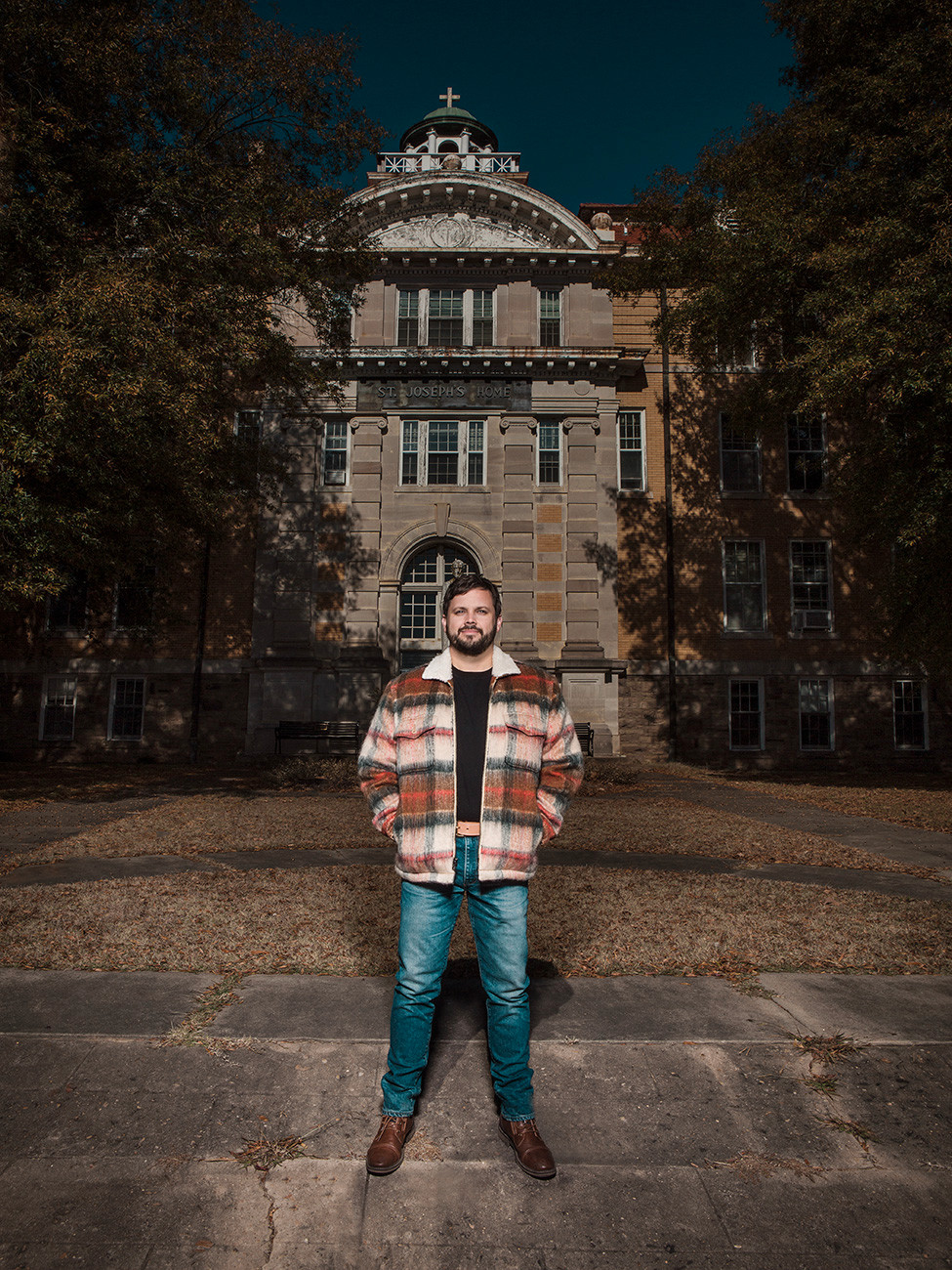 Ellis graduated from what is now known as the Fay Jones School of Architecture and Design at the University of Arkansas in 2006. He can recall growing up in his parents’ 1918 Craftsman style house in Little Rock and says he’s always loved visiting historic downtown districts and reimagining vacant spaces.

At the Wings Over the Prairie festival celebrating the state’s duck hunting industry, Ellis wandered away, to the consternation of his family, to explore Stuttgart’s Riceland Hotel. An opportunity to visit a historic location while on business is, for Ellis, an opportunity to explore.

Ellis praises the assembly of historians, archaeologists, designers and everyday concerned citizens who share that curiosity and make up the Preserve Arkansas organization.

“Everybody brings a different take to our advocacy efforts,” he says.

For his one-year term, Ellis and the board have set out a framework of tasks, but he acknowledges that every year something not on the Preserve Arkansas radar will come to light, like recent efforts to revitalize downtown Pine Bluff beyond the officially endangered Saenger Theater.

Set for Jan. 17, at the Arkansas Governor’s Mansion, the upcoming awards had a record number of submissions, proving perhaps that interest in historic preservation runs deep in Arkansas.

“It’s hard to choose,” Ellis says. “We just end up giving out more and more awards.”

Of course, Preserve Arkansas has had its hits and misses. Sometimes people just don’t rally behind a project, money can’t be raised and a structure is lost to the ravages of time. For every rescued Donaghey Building in Little Rock there is a lost Clarendon Bridge in Monroe County.

“It was just one of those ones we couldn’t get the right person to sign off on,” Ellis says of the bridge, demolished in November, that spanned the White River and stood as a rare, surviving example of a cantilever through truss bridge.

“That was just a beautiful, historic structure.”

As for success stories, Ellis turns to the Rock Island Depot in Perry. It is the last wood frame train depot on the old Rock Island Railroad line in Arkansas. Thanks to community support, initial funding saved the building from demolition and got it moved. Now it is awaiting its second round of grant money.

Ellis notes that Preserve Arkansas doesn’t necessarily try to save a structure for the sake of returning it to its original look as a historical curiosity. Restored buildings often find new life if given a new purpose, he says.

“Hopefully the next phase is it will be restored and they can use it as a community center or something like that,” he says.

Perhaps surprisingly, younger generations, often blamed for the demise of a host of American institutions, are motivating communities to take on restoration projects.

Both Ellis and Patton note the revitalization of urban areas to attract young professionals — turning old brownstones into multi-use residences and warehouses into brewpubs — sometimes helps accomplish the work of saving history.

“The new cool thing is local,” Ellis says. “We’re now promoting local history, learning about your neighborhood and your history.”

Preserve Arkansas’ work is done across all those fronts and more because, Ellis says, there is no time like the present to do the work of preserving the past.

“A lot of these little historic buildings get left by the wayside,” he says. “When it’s gone, it’s gone forever.”

A lineup of historic structures saved after appearing on Preserve Arkansas’ Most Endangered Places list. 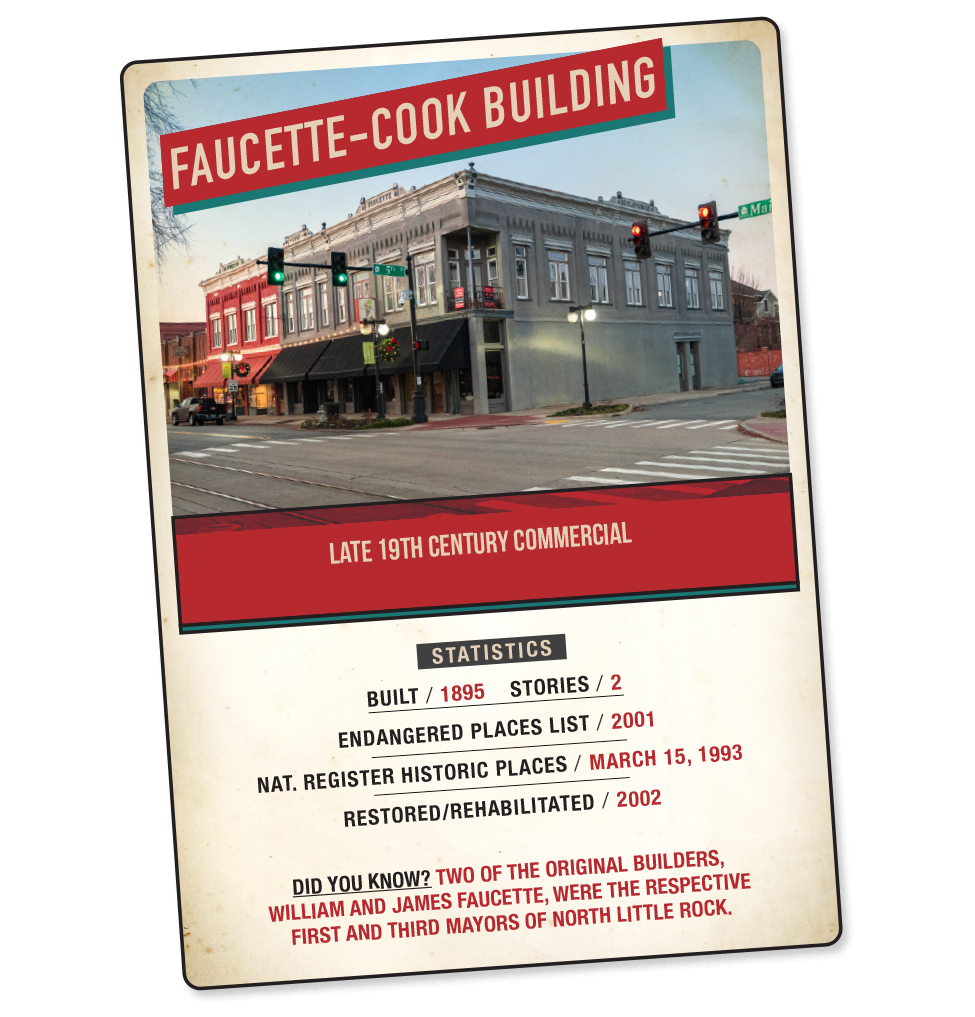 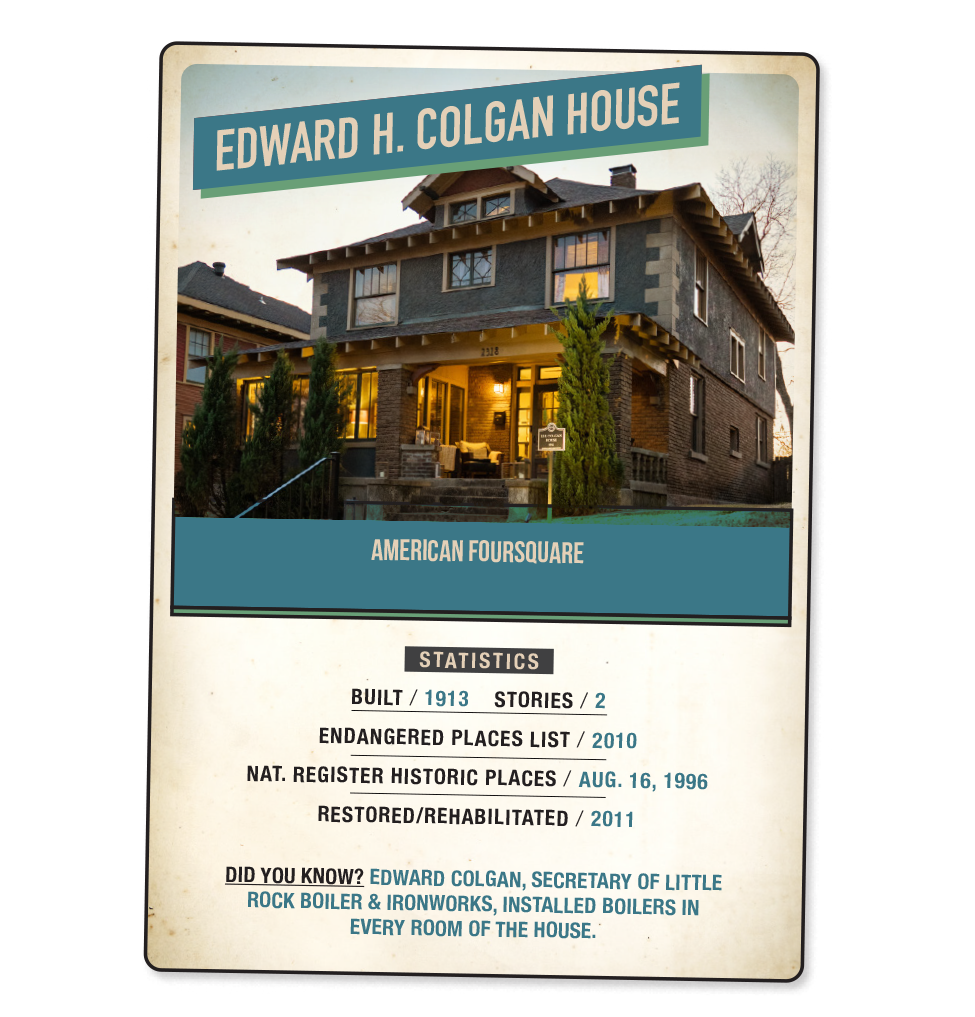 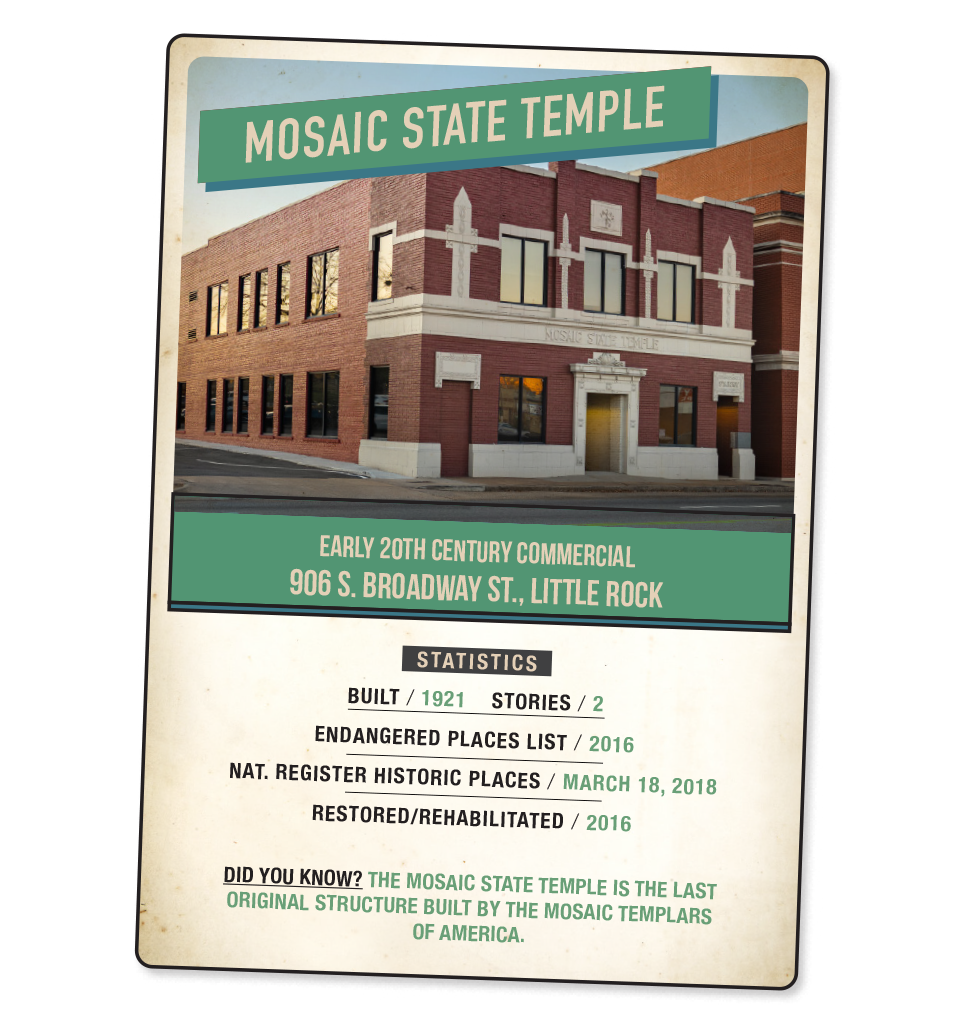 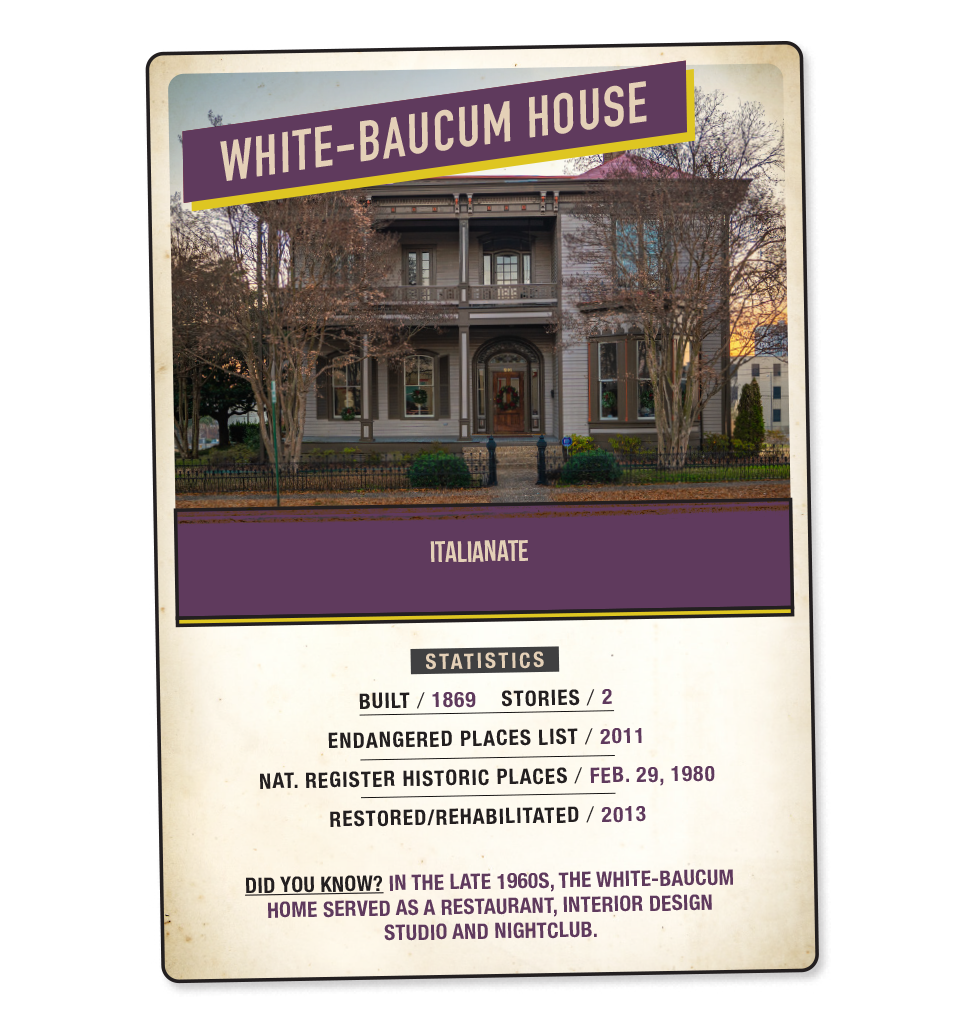 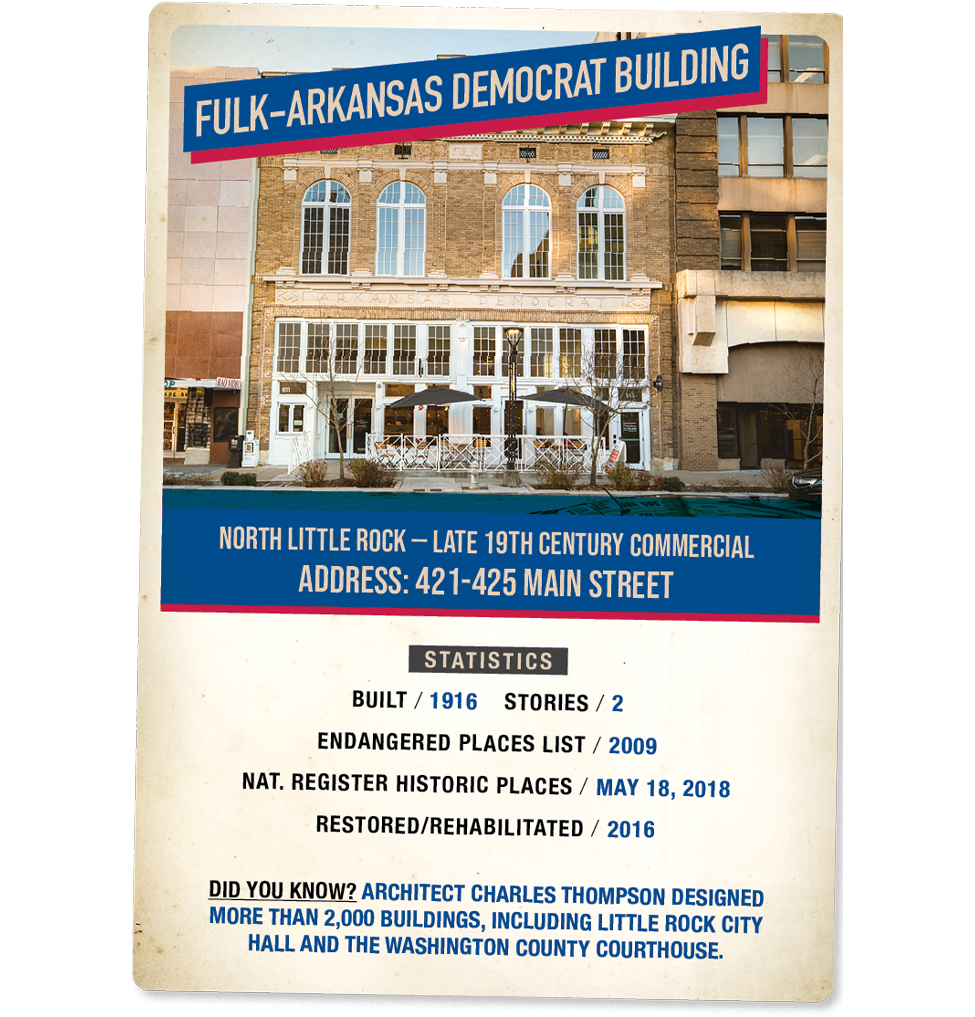 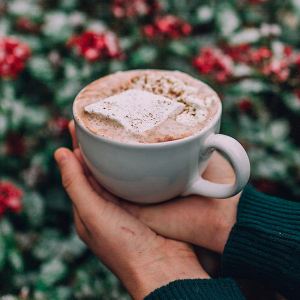 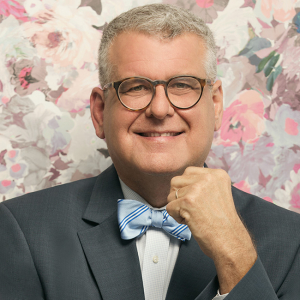 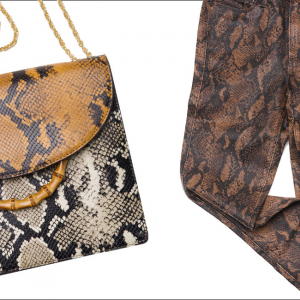 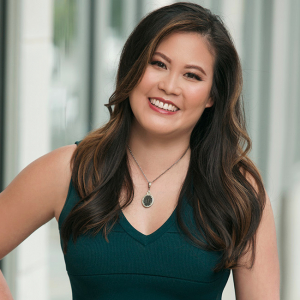 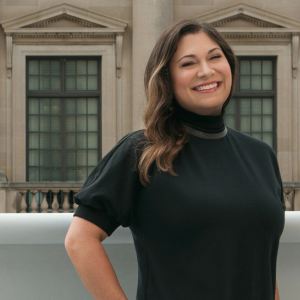