Categories: Lifestyle, Local Guides
The evolution of downtown and Argenta from riverside wilderness to thriving centers of commerce and culture. 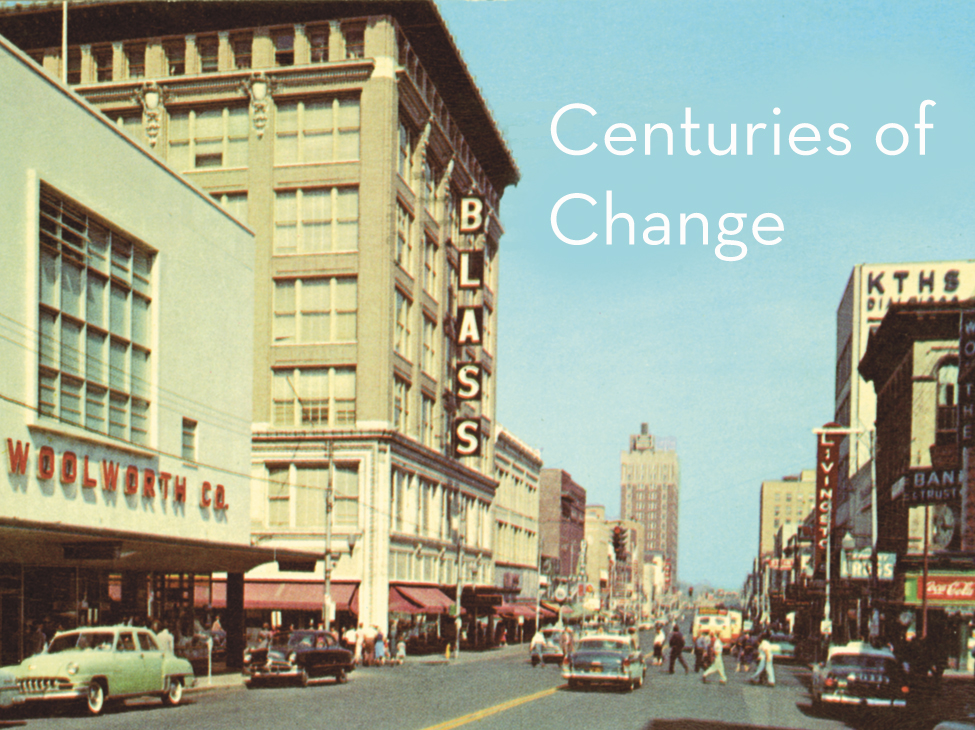 The downtown areas in North Little Rock and Little Rock have followed similar arcs of development.

Both came from humble beginnings after being discovered by explorers on the Arkansas River — a border which both share — to be developed into blossoming destinations.

In the 1960s, urban renewal projects on both sides of the river had negative effects that lasted for decades, but both areas are now on the rebound and once again flourishing.

In the early 1800s, the land across the Arkansas River from Little Rock was simply known as Opposite Little Rock and was generally used as a terminal for ferry travel across the river.

What is now known as North Little Rock, was then a place where several towns by different names and leaders tried their hands and failed.

The area went by so many names in so few years that the Arkansas Gazette wrote an editorial in 1871 attempting to educate its readers on the name of the town across the river.

One settlement that stuck and eventually grew into an industrial town was Argenta. The name was derived from the Latin word for silver, Argentum. It was designated by Colonel Robert C. Newton, the son of Thomas Newton, a farmer and president of the Arkansas Mining Company. The mining company was said to have culled silver from the Kellogg Mine, just north of Argenta.

In the early 1860s, the first railroad was built in the area, and by the late 1870s, Argenta was a major railroad crossing in the region. The town blossomed from its roots in railroads, cotton oil mills and factories.

It was industrious, and it was rugged. Without a municipal government, Argenta struggled to rein in its ever-growing population. The town’s saloons invited gambling and crime. 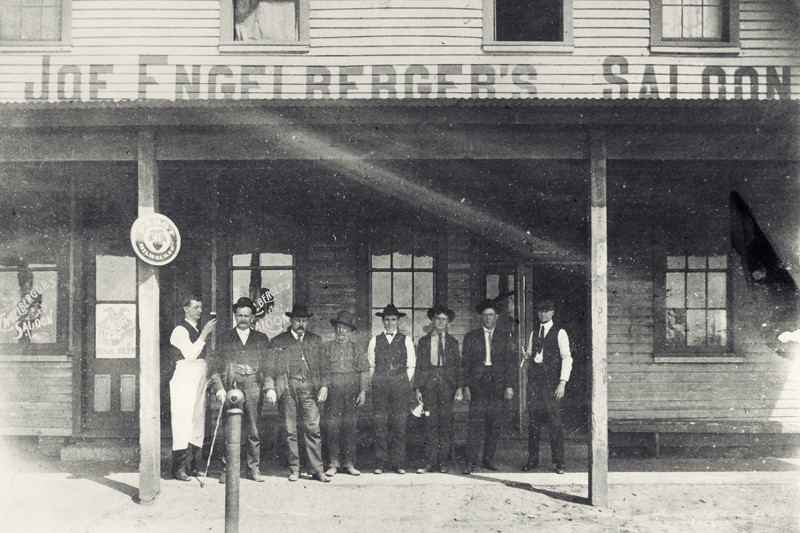 The Engelberger Saloon – owned by Joseph Engelberger, a German-Swiss immigrant – was a popular watering hole in Argenta for more than 25 years until prohibition in 1916. Originally located at 303 E. Fourth Street (shown in this photo), the saloon moved in 1910 to a two-story building at 400 Main Street. Still there, the 124-year-old building was constructed by the Faucette Brothers as a saloon and boarding house in 1890.

To combat the dilemma, in 1890, Argenta residents attempted to incorporate as a city of the first class. But little did they know those plans were about to derail. The City of Little Rock moved swiftly to annex Argenta, making it the city’s Eighth Ward.

Needless to say, the residents of Little Rock’s newest ward were none too happy with the annexation and challenged it, to no avail, all the way to the Arkansas Supreme Court. 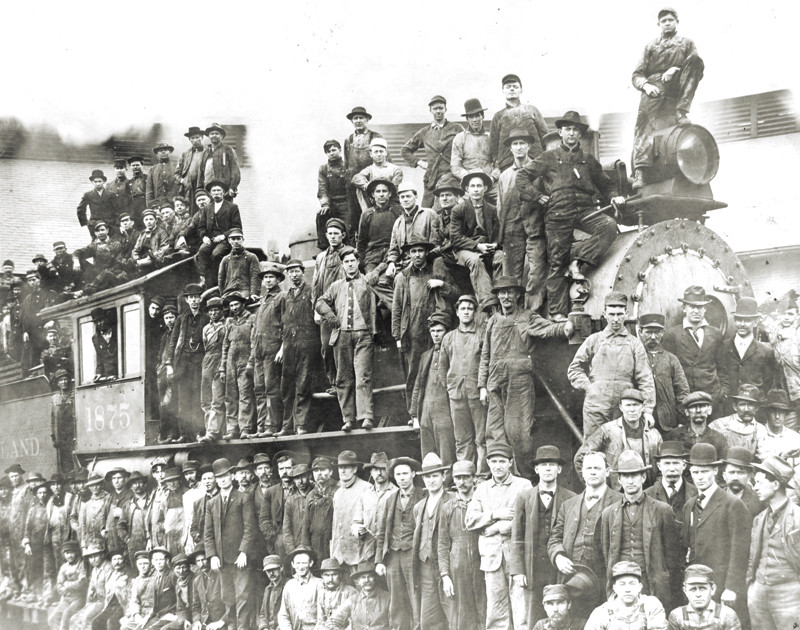 Share It Tweet It Pin It
Rock Island shop workers gathered for this photo in 1900. The shops were on E. Fourth Street in North Little Rock until 1904, when Rock Island moved its facilities to Little Rock. Rock Island built a depot at the old site in 1911 as a concession to Argenta. The depot stands today, the only one remaining from North Little Rock’s rich railroad history. The Chicago Rock Island and Pacific Railway facilities in Argenta were originally owned and built by the Memphis and Little Rock Railway, the state’s first railroad.

After becoming Little Rock’s Eighth Ward, one of the two aldermen elected to serve was William Faucette. William and his brother, James, would come to be influential players in the future of North Little Rock and Argenta.

They came to Argenta in 1878 and, like most during that time, worked for the railroad. The brothers also operated a boarding house, built an electric light plant and established a privately-owned bank.

It was 1901 when – with the help of a few state legislators – William Faucette helped steamroll the Hoxie-Walnut Ridge bill through the 34th General Assembly and into law. At face value, the bill appeared to allow Hoxie and Walnut Ridge to consolidate. A closer look revealed language that allowed annexation or consolidation of cities within one mile of one another if the residents of both cities approved.

Two years before the bill made its way through the Arkansas Legislature, the Faucette brothers paid the filing fee for an area just north of the Eighth Ward to be incorporated as North Little Rock. The Hoxie-Walnut Ridge bill was signed into law in March 1903. On May 11 of the same year, with the backing of petitions from Argenta property owners, Faucette announced plans for Argenta to be annexed by North Little Rock. A special election was held in July, and just like that, Argenta was out from under the blanket of Little Rock.

North Little Rock became a city of first class in 1904 with William Faucette as its first mayor. 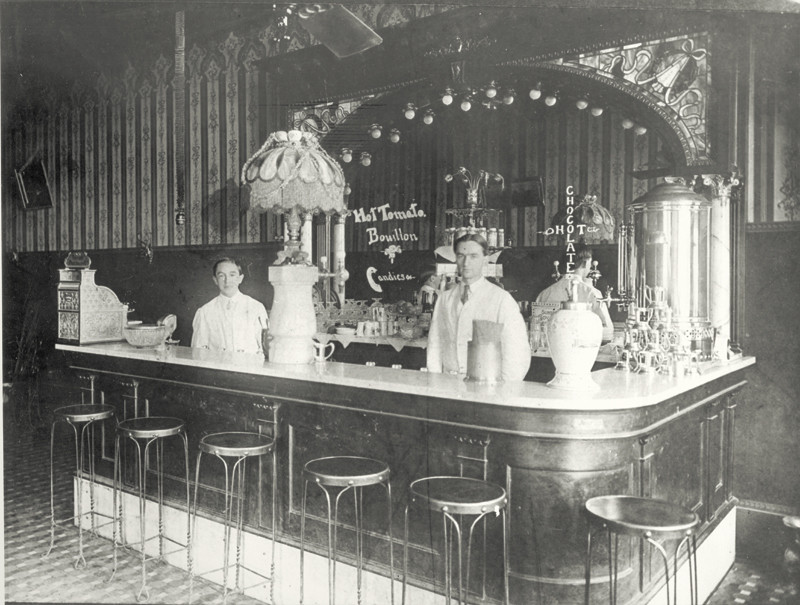 Share It Tweet It Pin It
Hall Drug Store, owned by John T. Hall, opened in early 1903 after Hall bought the store from Charles J. Humphreys. Hall had worked for Humphreys, a pharmacist who opened the Humphreys Drug Company in Argenta in 1882 and constructed what’s known today as the Argenta Drug Company building at Fourth and Main in 1887.

The capital city of Arkansas earned its name in 1722 when French explorer Bernard de la Harpe noticed a rock formation and dubbed it “la petite roche,” which means little rock in French.

Slowly, the wilderness town turned into a city. By the close of the 1800s, residents enjoyed electricity, telephones and a public water system.

Construction on the state Capitol began in 1899 and finished 15 years later in 1914. Little Rock’s first skyscraper was a 10-story building known as the Southern Trust building, which was erected in 1907.

In the first few decades of the 1900s, the Southern Trust building would be joined in the sky by several other highrises downtown. In the 1920s, downtown was part of a construction boom that included the Donaghey Building, which became the city’s largest building, at 14 stories. 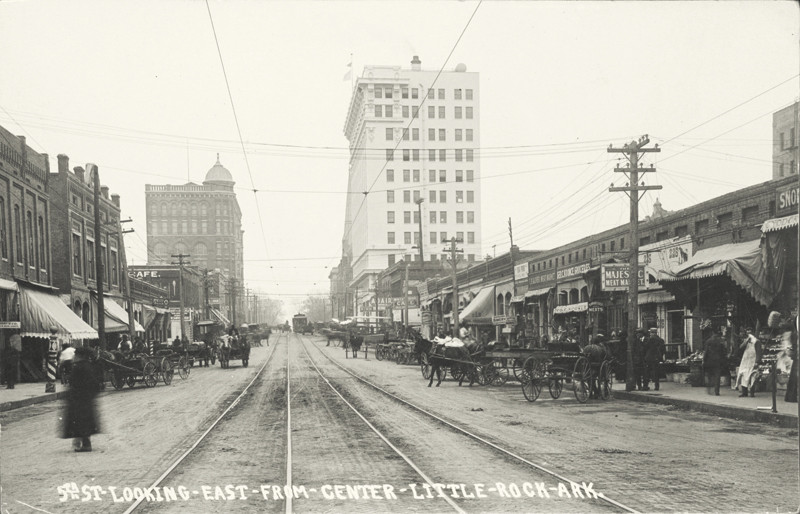 Even in the days of horse and carriage, Capitol Ave. was a main thoroughfare, as seen in this undated photo, looking east from Center. 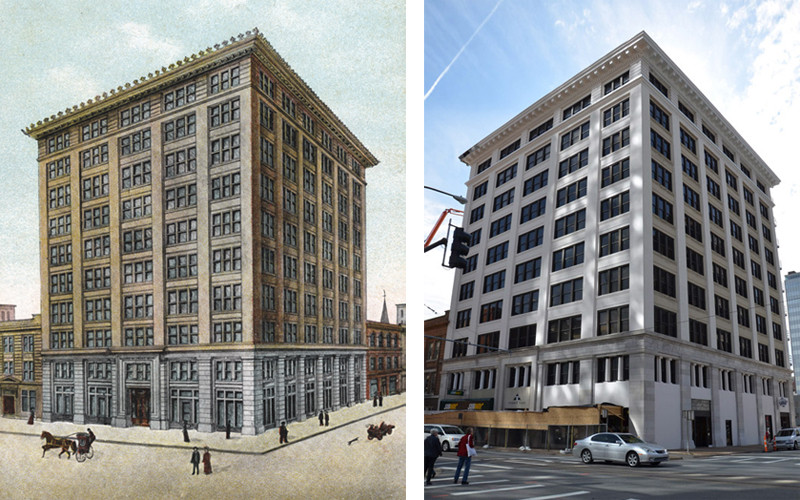 Share It Tweet It Pin It
Erected in 1907, at 10 stories the Southern Trust Building was Little Rock’s first skyscraper.

In 1940, downtown welcomed the addition of a few department stores, including Pfeiffer, Blass and M.M. Cohn.

Also in 1940, the Robinson Center Music Hall was formally dedicated. The product of the Public Works Administration during the Great Depression, the auditorium has welcomed numerous performers, including Louis Armstrong, Katharine Hepburn, Ella Fitzgerald and Elvis Presley.

Fast-forward more than 70 years and downtown is full of flourishing areas like SoMa, the ever-developing Creative Corridor and the River Market.

One area of downtown Little Rock that has seen a big transformation in the past decade is the South Main District.

Though historic, for years the spot of land between Interstate 630 and Roosevelt Road on Main Street was merely a pass through.

The Bernice Garden – which opened in 2007 – and Anita Davis helped change that.

Through events at the Garden, residents grew accustomed to walking the area, and the neighborhood soon blossomed. Davis bought several more properties in the area and was deliberate to whom she rented out space. She wanted diversity in offerings, and businesses that supported the area’s goal of having walkability between stores, and sustainability.

Boulevard Bread Co. was one of the first draws to the area. It was soon followed by the Green Corner Store, the Root Café across the street and Davis’ own ESSE Purse Museum next door. Other businesses, like South on Main and the Oxford American, soon followed.

Before it housed the Green Corner Store, the Lincoln Building — built in 1905 — was home to a number of other businesses, including Dawson Drug Store. Compare the historical and current views by moving the slider across the image.

Changes have also taken place on the north side of Main Street. Several stores were lost in 1962 as part of an urban renewal program. About 15 years later, the street was closed off to vehicle traffic to make way for a pedestrian mall. The Main Street Mall opened in 1987, but failed. Main Street was redesigned and reopened to vehicles in 1991.

Now, there’s another rehabilitation project happening on Main Street, but this one seems poised for success.

The Creative Corridor was a project unveiled by the City of Little Rock and the Downtown Little Rock Partnership in 2012. The idea is to transform a four-block strip of Main into a work/live environment with a little bit of everything in between.

Just a short time since its announcement, the transformation is already beyond evident.

Ad agency CJRW has recently made its home at 300 Main Street, former home of Bennett’s Military Supplies, and Jones Productions is just across the street.

In terms of the performing arts, the Creative Corridor isn’t lacking. The area has been home to the Arkansas Repertory Theatre since 1988, and it will soon add the Arkansas Symphony Orchestra and Ballet Arkansas.

By the 1950s and 1960s, downtown was home to a multitude of businesses, including department stores, drug stores and more, as shown in this undated photo taken from Second and Main streets. See the current view (just down the street from Soirée headquarters!) by moving the slider across the image.

What is now one of downtown Little Rock’s crowned jewels was once filled with empty, condemned buildings.

That started to change in the early 1990s, as the River Market was part of a $300 million development along the Arkansas River. It opened in 1996 with much fanfare.

The district itself only encompasses a small part of downtown, extending west to Main Street, south to Capitol Avenue, east to the Clinton Presidential Library, and north to the Arkansas River. However, it packs quite a punch in terms of its offerings.

The district is built around the Ottenheimer Market Hall, which is a year-around, 10,000-SF indoor market housing numerous restaurants.

Within just a few blocks, patrons are able to enjoy art galleries, theater and history at locations like the Arkansas Studies Institute Gallery, the Ron Robinson Theater and the Old State House Museum, just to name a few.

The River Market also has its fair share of upscale lodging and eateries. A quick walk down President Clinton and River Market avenues gives patrons the chance to enjoy a sit-down lunch or dinner at a white tablecloth restaurant, or the opportunity to get a quick bite to eat with a draft beer. Tourists from out of town can enjoy a stay at one of the luxurious spots like the Capital Hotel, the Doubletree or Marriott.

Looking to the future, the outlooks are bright for Argenta and downtown Little Rock.

With a variety of options that include shopping, restaurants and performing arts, in addition to various residential spots, there’s no reason to believe the areas won’t continue to attract the masses to live, work and play.

Both have endured hard times through the years, but it looks like the vibrant times are here to stay. 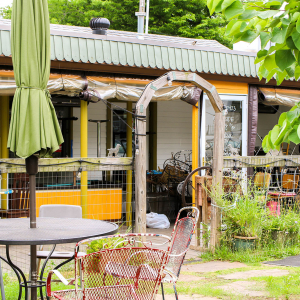 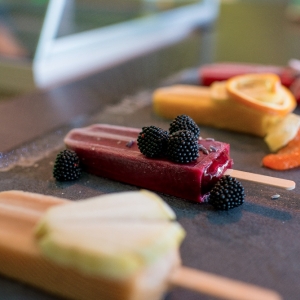 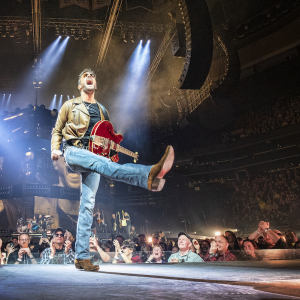 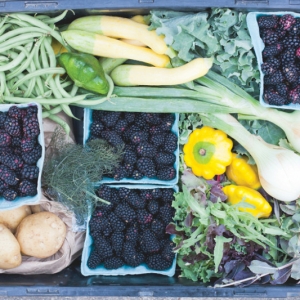 What to Buy at Farmers Markets in April... 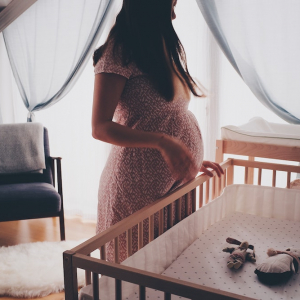 What You Need to Know About Toxins in Ba...
Permalink